Exordium
After a great game against Khador, I get asked if I have time for another game. I accept, another great game versus a great opponent, except this opponent plays Cygnar. I thought Retribution infantry was good.... everytime I look at Cygnar infantry, I just want to switch over to the blues! Anyways, I don't feel like playing a long game, were I have to figure out how to knock down a defence 19 model with heightened reflexes. So I ask my opponent if its okay that I play Issyria.

"Elves are elves, I just want to gun them down!"

If you want to read the dirty Cygnar version, theres a link to my opponents blogg. 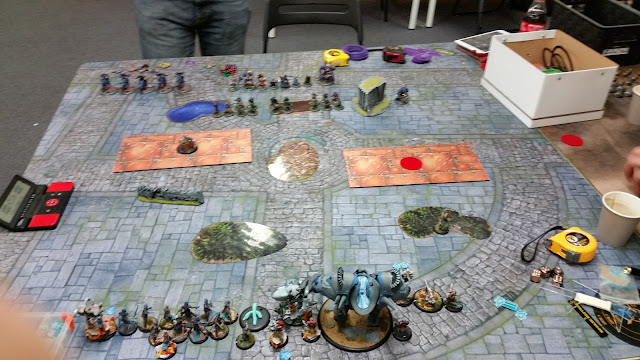 We were playing the scenario, Entrenched. We roll to se who goes first, I win the roll and opt to go first. I can`t see any advantage in picking sides this game since Cain2 is the almighty gunslinger from hell. Plus I don`t think my opponent wants to pick my side, tho I secretly would like to stay at this side. 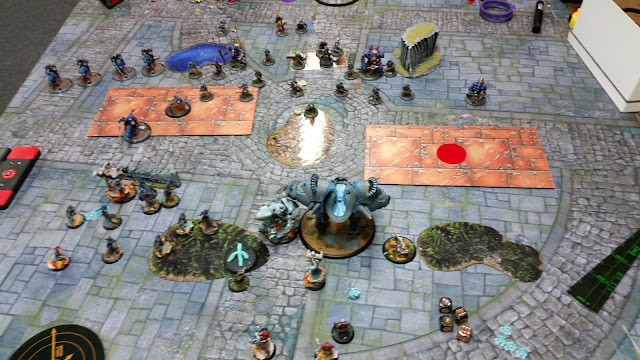 I run up, feeling safe. Position for next turn, and pass the turn over to my opponent. Cygnar being Cygnar, manages to kill of HRT attachment, a few nyss. Runs all trenchers up to dig in. 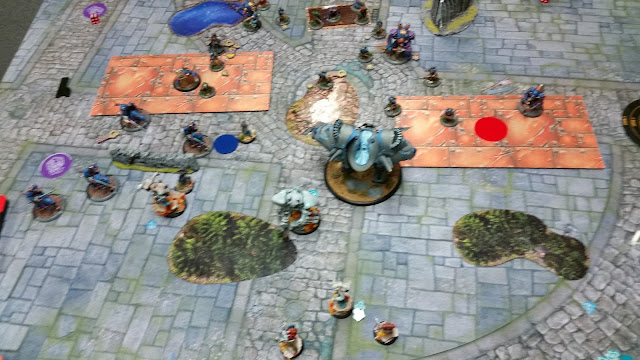 Nyss Hunters walk up, shoot trenchers, out of 8 shots one trencher dies.

"I want to take a minute or two to talk about Trenchers. This has to be the most broken unit in the game right now. They are so far and beyond what is in the realm of okay. This unit really can do anything and everything. I would gladly trade any Retribution unit for this unit. I would gladly trade any retribution unit to get these guys as mercenaries. For 16 points they are so much better than anything Retribution or any other faction has. Talking strictly about units."

I walk up and shuffle a bit more, this game is lost in my mind. Only offensive models left are my two jacks. I pass the turn.

(In all my anger, I move Issyria, camping two focus out of 4 inches from Hyperion, but 3,98 inches from Discordia. We decide to move her out of range.)

My opponent take a few shots, kills a bunch of stuff moves in to score. And passes the turn, feeling very happy about the game. 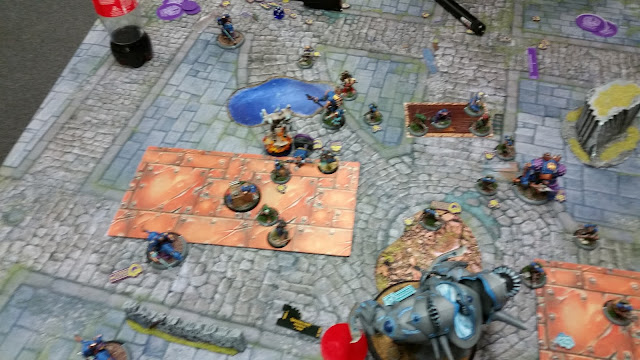 I don't get it, I look the throw rule in the rulebook just to make sure. My opponent just handed me the game on a silver platter. Cain standing there with defence 22 caping 2 focus is dead.

I calculate the math, and just to be on the sure side, I walk up my chimera and kill a Storm lancer. Freeing up the two last remaining Nyss hunters. I walk up Hyperion and throw the Chimera one inch behind Cain knocking him down. Cain takes collateral damage, Issyria feats and ancillary attacks Hyperion. Dice show 1, 1, 1. At least blas does some damage. Discordia sprays Cain, and leaves him standing one 1 box. My Nyss Hunters charge in and kill Cain!

We talk a bit about the throw rule, it's ridiculous. We both hope it gets changed. Also the lesson I want to remember from this game is, distance. Your caster is only safe with enough distance. You are truly unkillable when you are out of range for everything, and only then.

I'm sure by now that my opponent wants revenge, Cain has died more than once by my hands. I feel great!
kl. 19:50

The texts, details my competitive Ret journey in Warmachine & Hordes.
The faction tags below link to battle reports with every represented faction.